A Vision of Love

William Penn, a 17th-century Quaker activist and political theorist, had a new social vision of brotherly love. Penn’s experience as a religious dissenter in England drove him to create, organize, and develop an English colony in America based on religious freedom and harmonious diversity — his colony Pennsylvania would become a successful model for a civil society guided by love, and the seed of a new nation.

I heard the voice of the Lord, saying, Whom shall I send, and who will go for us? Then said I, Here am I; send me.

The son of a naval hero and friend to King Charles II and the future King James II of England, William Penn joined the Society of Friends as a young man through the influence of Quaker leaders in Ireland and England. In his previous studies at Christ Church, Oxford University and at the Protestant Academy of Saumur in France, Penn began to rethink his views about the relationship of religion, morals, and politics. His reading of the Bible convinced him that the conscience must be free, leading him to openly question government policy of state-mandated and enforced worship in the Church of England.

Penn purposefully tested the validity and reach of English laws meant to conform and constrain religious practice. Inspired by the biblical ideal of a righteous and just community of brotherly love, Penn envisaged a society governed by love where all people are treated as brothers and sisters in the family of God and with the freedom to believe and worship God in the way they believed to be true. Penn’s philosophy of respect and dignity for all influenced his early writing and later lawmaking in Pennsylvania. His vision of love was the fundamental animation for society.

Love is above all; and when it prevails in us all, we shall all be lovely, and in love with God and one with another.

Let love make you serve one another. For the whole Law is summed up in one commandment: 'Love your neighbor as you love yourself.' 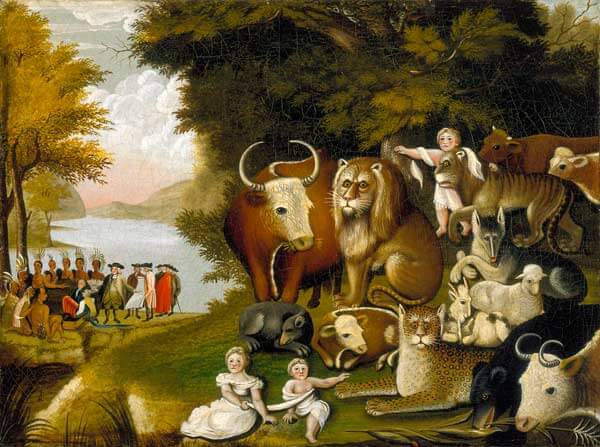 Edward Hicks, the painter, was a Pennsylvania Quaker who used a folk-art style. Here in his The Peaceable Kingdom, Hicks pulls together a biblical scene with Penn's arrival in his colony to suggest movement toward the 'peaceable kingdom' on earth. The theme of this painting, drawn from Isaiah 11, evokes a message of hope and the promise of peace: "Wolves and sheep will live together in peace, and leopards will lie down with young goats. Calves and lion cubs will feed together, and little children will take care of them." Penn is pictured on the left meeting with Native Americans to establish peace between peoples in his new colony.

Penn came to believe that freedom of conscience, and thus religious freedom, were ideal political conditions for discovering truth and fostering faith. He reasoned that coerced belief was not true belief. People should have the freedom to think, believe, and practice their faith without interference by the official state church. Penn became a Dissenter and provocative essayist who challenged the privileged status of the Church of England. His views against the existing church establishment led to his being arrested, tried, and imprisoned multiple times in England.

A steady stream of his religious pamphlets like, Truth Exalted and The Sandy Foundation Shaken questioned traditional church teaching and landed him in prison in the Tower of London for blasphemy. Cleared of blasphemy and eventually released, Penn continued writing and protesting. During one imprisonment, he wrote his most famous treatise and spiritual classic, No Cross, No Crown, an argument for the simplicity of early Christianity and Christ-like love and self-denial. Penn used his imprisonments to work through his theology and philosophy of freedom. His early arguments for freedom of religion including, “The Great Case for Liberty of Conscience,” would heavily influence the legal framework and constitution of his new colony, Pennsylvania.

Be always humble, gentle, and patient. Show your love by being tolerant with one another.

Penn, though a Dissenter, was loyal to the King and his country. He wanted to try a “holy experiment” of religious freedom and brotherly love in the American colonies. In doing so, he hoped that a successful model colony would demonstrate that these ideals were not a threat to the British constitution, but rather beneficial supports of English liberty and justice. Penn petitioned the King for a land-grant as payment for a debt the King owed to his late father, Admiral Sir William Penn.

In March 1681, King Charles II signed the Charter of Pennsylvania, the new colony being named in honor of Penn’s father. Penn was appointed Proprietary Governor (owner) and issued his Frame of Government in 1682. In this new experimental colony, Penn outlined a democratic governmental framework that reflected his vision of love. The Frame emphasized fair distribution of land, just and loving treatment of citizens and non-citizens, and above all freedom of conscience and worship. He named the capital city of his colony “Philadelphia,” a word from the Bible meaning “brotherly love.” The values that Penn instituted in the colony’s constitution and laws were grounded in his personal experience and interpretation of biblical values like liberty, justice, equality, and brotherly love. 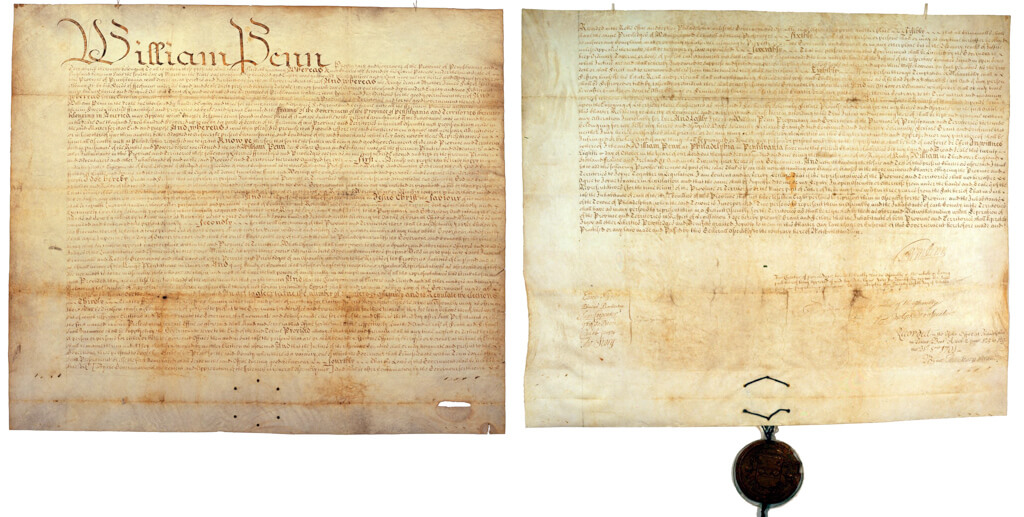 I have so obtained it [Pennsylvania]… that an example may be set up to the nations. There may be room there, though not here [England] for such a holy experiment. 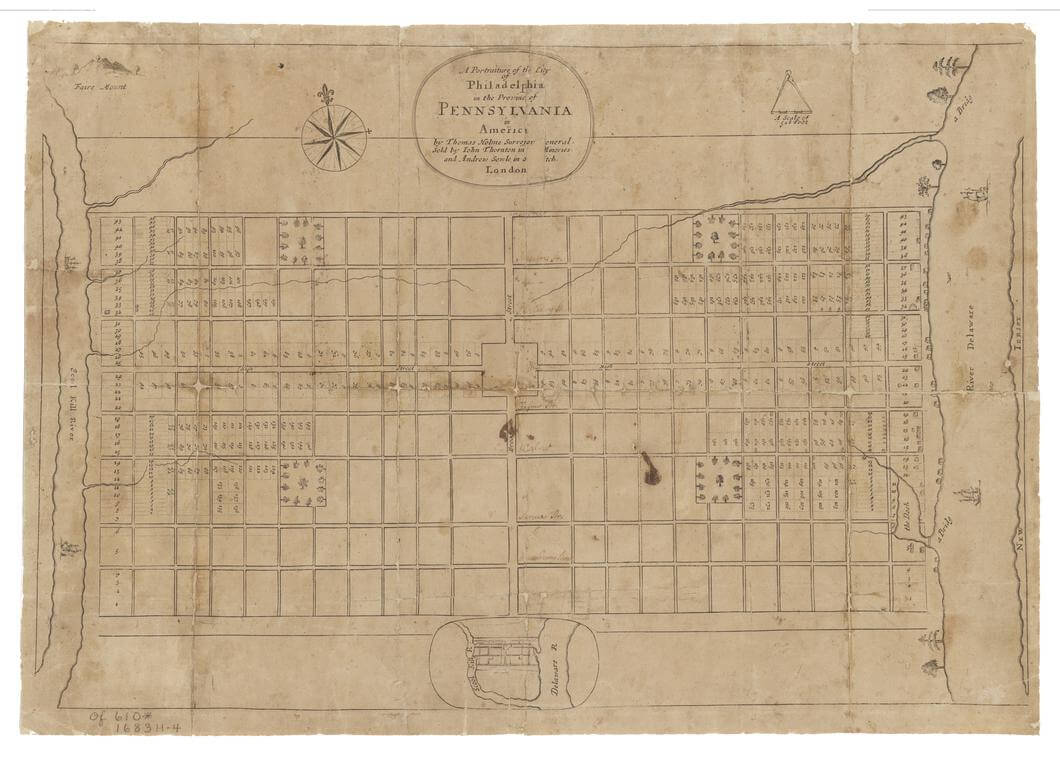 Map of the City of Philadelphia, 1683

Penn’s determination to follow the Bible's call to “love your neighbor” influenced the colony’s treatment of the Native American tribe that lived around them. Penn was captivated by the Lenni Lenape and their culture, and even speculated that they might be elder brothers in faith and morals, a lost tribe of the nation of ancient Israel that may have migrated to America. He directed the colonists to treat the Lenape as equals, offering love, kindness, justice, and respect. Penn made a peace treaty with the Lenape, a show of good faith with exchanges of love and friendship that served as an example to Pennsylvania’s colonists of how to live out a social vision of brotherly love. 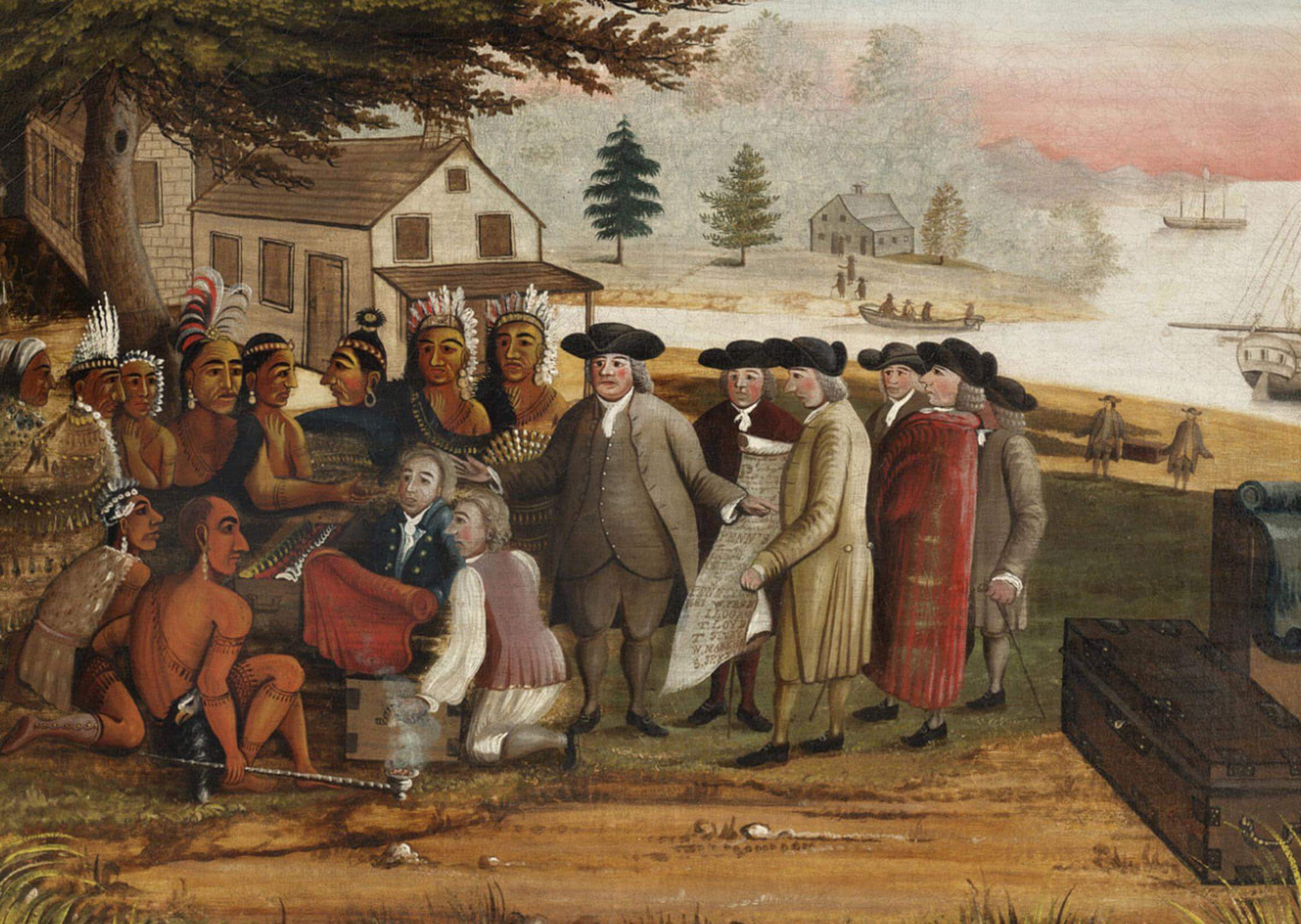 According to oral tradition, soon after William Penn arrived in Pennsylvania in 1682, he exchanged promises of friendship with members of the Lenni Lenape Indians in the riverside town of Shackamaxon on the shore of the Delaware River in what is now the Fishtown neighborhood of Philadelphia. No documents remain as evidence of the meeting, but depictions such as these were based on memories and oral histories. As a memorial to this treaty, Penn Treaty Park now stands in the presumed location, and the meeting’s promise of love and friendship serve as a guiding light for community relations to this day

A Lenape Wampum Belt. Traditional wampum belts were used record covenants and treaties. Terms of a

I have great love and regard toward you, and I desire to win and gain your friendship by a kind, just, and peaceable life.

The greatest lawgiver the world has produced, the first in either ancient or modern times who has laid the foundation of government in the pure and unadulterated principles of peace, of reason, and right.

Penn's "holy experiment" was successful at many levels. Among the youngest of the American colonies, Pennsylvania quickly prospered attracting immigrants not only from other colonies and the British Isles, but from the European continent as well. In the Old World, many were persecuted for their faith and sought the freedom to live by their beliefs in a new land of opportunity.

Penn's capital city of Philadelphia flourished to become the largest metropolitan center in North America at the time of the American Revolution. Its religious communities included: Quakers, Anglicans, Presbyterians, Baptists, Lutherans, Brethren, Mennonites, Catholics, Jews, and others, an unparalleled religious pluralism in America at the time. Pennsylvania's ethnic diversity was equally impressive and inclusive, and yet slavery remained a blind spot of Penn's social vision. The colony's Charter of Privileges or 1701 Frame of Government, codified freedom of conscience and religious liberty. At the time, Pennsylvania was one of the most free and democratic governments in the world.

Later America founders like Thomas Jefferson and James Madison were inspired by William Penn and his laws, noting his philanthropy and contributions to civil and religious liberty. His legal protections for religious freedom chartered a rare pluralism that fostered a civic order of tolerance where a diversity of peoples and faith traditions could live together with their deepest differences. Penn's vision of brotherly love continues to inspire citizens to strive for peace and harmony in their common life, even as America's pluralism expands beyond anything Penn could have imagined in his own day. His vision of brotherly love and religious freedom remains relevant, and perhaps even needful, in America's ongoing experiment of liberty and justice for all. 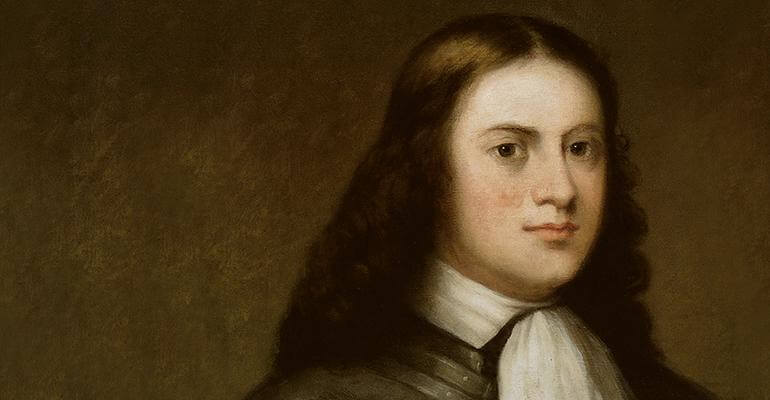 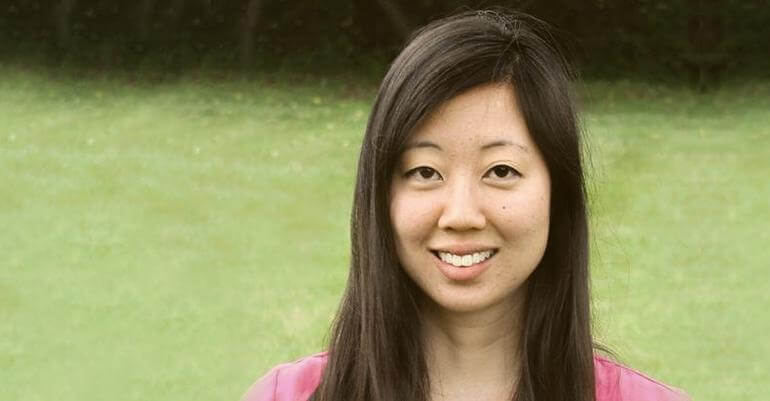 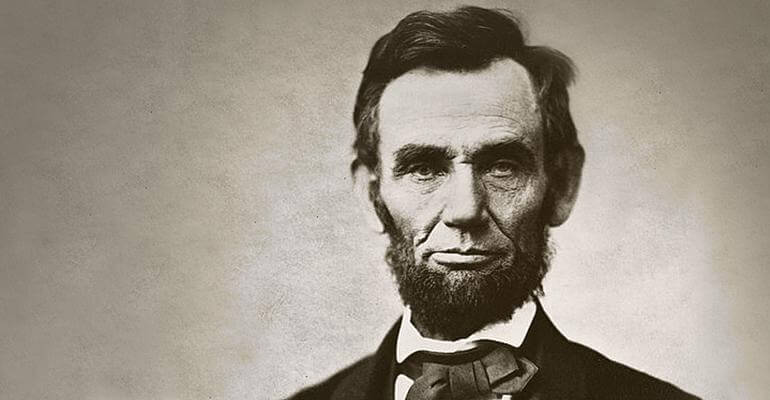 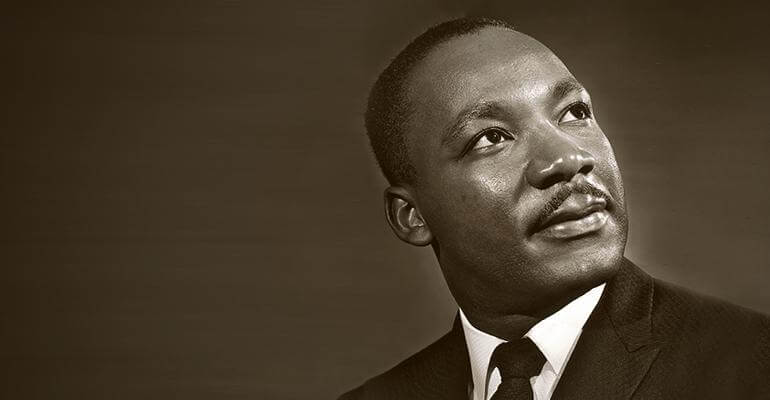